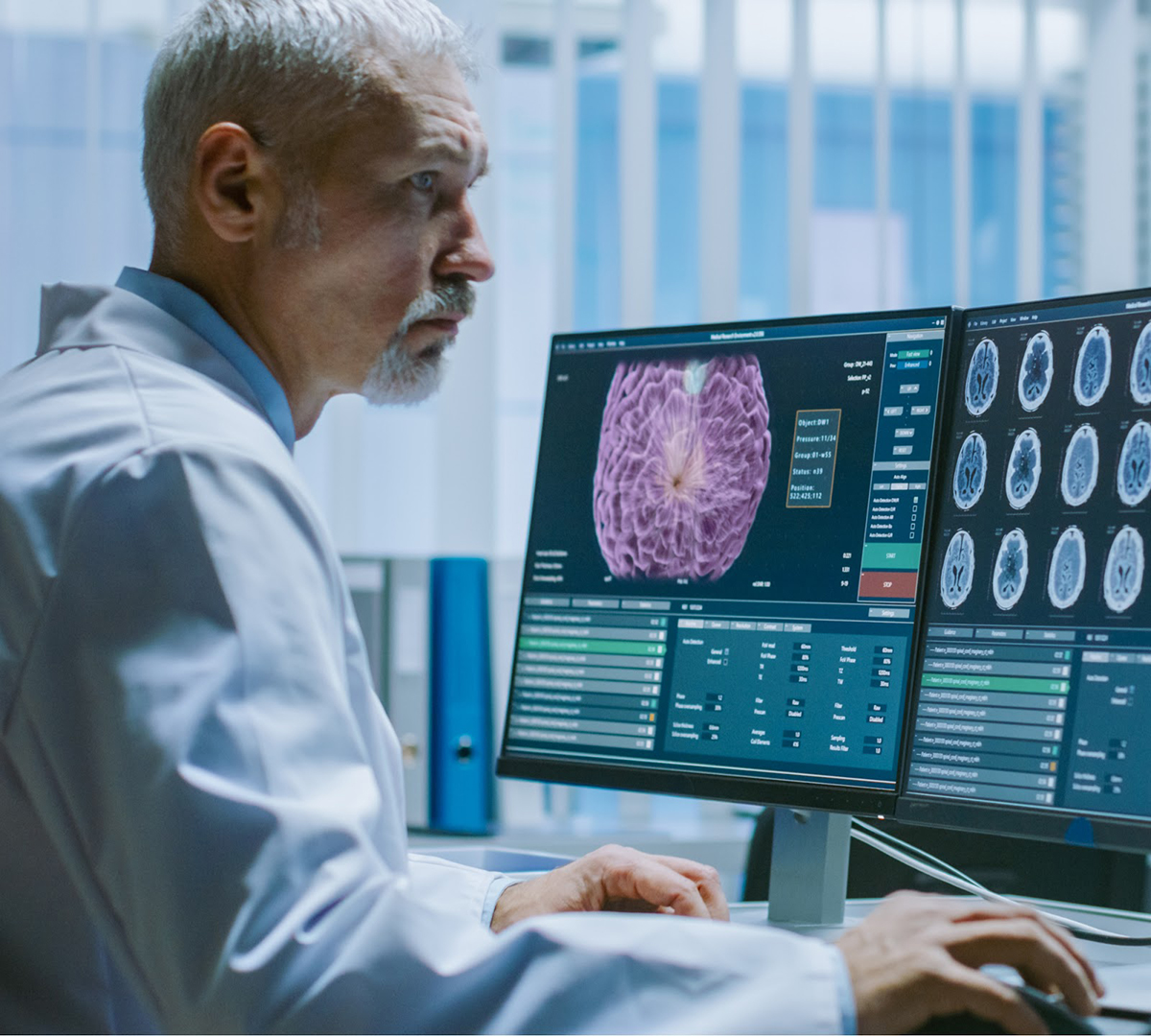 Alzheimer’s disease (AD) is a complicated disease process leading to a cascade of events in the brain. Based on an accumulation of research, it is believed that the initial trigger is an increase in a protein called abeta-42, referred to as amyloid beta. This protein sticks together and causes the formation of amyloid plaques that deposit themselves between neurons (brain cells), possibly affecting communication between neurons.

Next, another protein called tau begins to cause tangles in the brain cells. The tangle formation is like tying the cells into knots, which ultimately kills the cells. We know that the formation of plaques occurs first, usually decades before the first symptom of AD is ever noticed, followed by the formation of tangles, and the two tend to spread in a similar pattern. As the plaques and tangles spread, additional cognitive and behavioral symptoms become evident.

Much attention has been given to understanding the process by which plaques and tangles form and how to interfere with this process. If we can stop plaques from forming, perhaps we can alter the progression of the disease. Studies have shown that the tangles, rather than amyloid itself, are correlated with cognitive decline. Thus, efforts have also been made to develop a way to stop these tangles from forming.

A type of drug called a monoclonal antibody, generally injected or infused, has been tested in different forms by different research teams for usefulness in stopping the formation of plaques and tangles. Some of these trials have yielded insignificant results. Others are still ongoing. Some have shown that we can get rid of plaque, but this may not lead to an alleviation of cognitive decline. The effectiveness of monoclonal antibodies is still under investigation.

As plaque and tangles build up, the brain atrophies (or shrinks) and communication between brain cells is compromised as brain cells die. The spaces, or synapses, between cells become larger and less able to communicate efficiently. Some treatment approaches are, therefore, focused on synaptogenesis, helping to build neural circuits that serve functioning. As the brain atrophies, there is a decrease in its use of glucose, its main source of energy. Hence, other treatments have focused on increasing brain metabolism through different mechanisms.

Finally, as a result of all of these processes, a person experiences cognitive decline as a symptom of these underlying mechanisms. This is where currently approved FDA medications come in, working at a neurotransmitter (or chemical messenger) level. Such medications may be helpful for some people for some period of time, but none do anything to stop the progression of the underlying disease.

The importance of finding a cure for Alzheimer’s disease cannot be overstated. The Alzheimer’s Association predicts that, by 2030, 20% of the population will be over the age of 65 and 10% of them will have Alzheimer’s disease. The emotional, financial, and other costs are extreme. We must move forward quickly, all doing our part, to try to find a cure and to identify and treat people as early as possible. Just as the underlying process of the disease is complicated, so will be the treatment.

It is likely that, over time, the treatment for Alzheimer’s disease will include a cocktail of treatments and interventions and that these treatments will be somewhat tailored to the individual, rather than a one approach cures all. We need to get there, one trial, one treatment at a time.

Clinical Trials—Be Part of the Solution

Clinical trials are highly regulated, with the patient’s safety of paramount importance. All trials, regardless of outcome, teach us something about this disease and how to cure it. At The CRCNJ, we are dedicated to working towards a cure. Please join us.

We have and will continue to work with companies testing different types of medications aimed at different stages in the process and focused on different populations, based on disease severity and other characteristics. To learn more about the trials for which we are currently enrolling, click here.

DIRECTOR AND FOUNDER OF THE CRCNJ