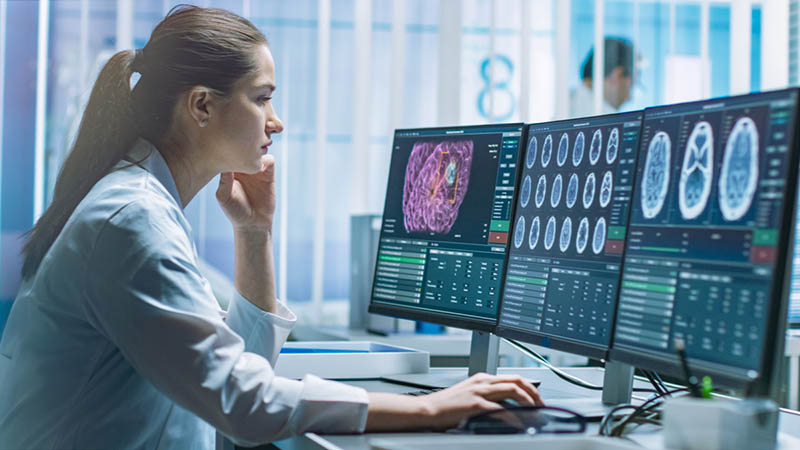 Alzheimer’s disease research has made great advances in testing and imaging. Scientists are investigating a number of disease markers and diagnostic tests, which may accurately and reliably indicate whether a person has Alzheimer’s disease and how far it has progressed. Some of these tests use cutting-edge technology and are not widely available yet, so participation in a research study that utilizes them is the best way to gain access to these specialized tests.

Imagine diagnosing Alzheimer’s disease before symptoms have started. Current diagnosis relies on documenting mental decline, which happens late in the disease process. Researchers believe that biomarkers (short for biological markers) may be the key to detecting Alzheimer’s early.

A biomarker can be measured accurately and reliably to indicate the presence of disease. Biomarkers may be found through neuroimaging of the brain, genetic testing, or through the detection of proteins in cerebrospinal fluid. Today, several potential biomarkers are being studied as possible candidates for earlier detection of Alzheimer’s.

Standard brain imaging like MRI and CT alone are not enough to form a complete diagnosis, but they can help rule out other brain diseases, distinguish the type of degeneration, and establish the degree of brain degeneration.

Neuroimaging is one of the most promising areas of research focused on early detection of Alzheimer’s disease. Usually only conducted in the research setting, neuroimaging can reveal the formation of plaques and tangles in the brain, which can only appear on specialized amyloid or tau PET scans. Getting access to these specialized scans is difficult, but not out of reach. By participating in research studies that utilize these scans, they can be available to you at no cost.

Brain imaging can be broken down into three different types: structural, functional, and molecular.

While these types of imaging cannot detect Alzheimer’s disease or other forms of dementia, they can help to rule out other causes of dementia.

Functional imaging reveals how well cells in various brain regions are working, by showing how actively the brain cells are using sugar or oxygen. Because it has been found that people with Alzheimer’s disease have lower brain cell activity in certain regions, scientists can start to use functional imaging to translate those patterns into diagnostic information. Examples of functional imaging are:

Molecular imaging is among the most active areas of research aimed at finding new approaches to diagnose Alzheimer’s as early as possible. It may detect biological clues indicating Alzheimer’s is under way before the disease can change the brain’s structure and function. Examples of molecular imaging include:

The best way to access these scans at no cost to you is to participate in a clinical trial that utilizes them. Find out if you qualify by contacting The CRCNJ today.

Another process used to find a biological marker for Alzheimer’s disease is through cerebrospinal fluid (CSF), which is obtained via a lumbar puncture. CSF can be measured for clinical or research purposes and sent to specialized labs for analysis. Research suggests that early stages of Alzheimer’s disease can cause changes in the levels of tau and beta-amyloid proteins, both found in CSF.

Researchers are actively studying whether Alzheimer’s disease causes consistent, measurable changes in urine or blood levels of tau proteins, beta-amyloid proteins, or other biomarkers before symptoms appear. Blood and urine sample analysis would be a simpler and more affordable way to potentially indicate the presence of Alzheimer’s disease years before cognitive decline. Based on individual results, these tests would also allow patients to be matched to specific clinical trials to further the study of drug development.

Unfortunately, there is no known cure for Alzheimer’s disease or memory loss. But research is constantly developing new and improved testing to detect Alzheimer’s early. Often, this research is cutting-edge and experimental and not widely available, but participating in clinical trials can make finding a cure a reality. By playing a more active role in their own health care, participants can have access to highly specialized brain imaging and other tests at no cost to them. These trials will help contribute to medical research so that a cure may be found.

If you or a loved one are interested in participating in a clinical trial, click here to see how The CRCNJ can help.